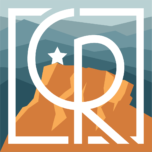 The Castle Rock Chamber is committed to strengthening the cultural community in the region, and we thank you for your support of this worthy cause.

Castle Rock Chamber of Commerce financially supports and encourages large-scale outdoor public art for the enjoyment of residents and visitors of the town in order to forge a lasting legacy from our beloved event, Castle Rock Artfest, renamed the Colorado Artfest at Castle Rock in 2015. 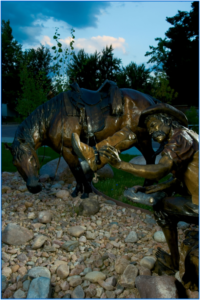 The Castle Rock Chamber, the Castle Rock Public Art Commission and the Douglas County Library then partnered on a project entitled “Cool’n the Dogs.” This life-sized bronze sculpture of a cowboy and his horse, by artist Craig Bergsgaard, is located at the intersection of 5th & Gilbert Streets. 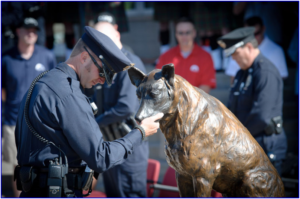 “JAX” by Janene Dirico-Cable is dedicated to all Police Service Dogs for the loyalty, fearlessness and sacrifice they give to their handler, fellow officers and the community.  “Jax” served the residents of Castle Rock from 2002-2008 with over 1,900 deployments for missing persons, illegal drugs and defending fellow officers. “Jax” was favorite among Castle Rock school children, often visiting schools. After his passing in 2010, Castle Rock Police Department officers began fund raising to memorialize all service dogs. 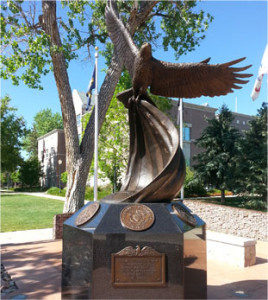 This master piece was designed and crafted by Mr. Bill Hueg of Peacock Studios in Westminster, CO.  The Eagle is 14′ tall and has a wingspan of 8′.  Freedoms Keeper sets atop a 5′ granite pedestal within Veterans Plaza. The entire monument encompasses a 40 x 40 square foot area on the same ground where the original Douglas County Courthouse once stood. 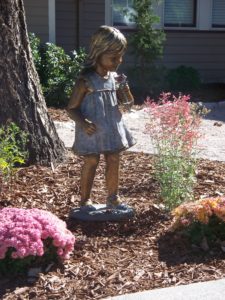 Welcoming all who come to visit the Castle Rock Chamber of Commerce stands “Ryleigh” who enjoys the flowers in the Chamber front yard.  This piece is an original bronze artwork by artist Marianne Caroselli.